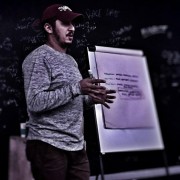 “One of the biggest mistakes we make is building infrastructure to protect what we have, instead of creating one for what we want.”

Fitness industry consultant Thomas Plummer said this at a seminar I recently attended. It rang incredibly true for me. Often, as fitness business owners, we will invest substantial time, money, or both into a strategy that later turns out not to be viable. Or sometimes, we will simply grow out of the strategy we have invested heavily in, and find we need to move on.

For an example, let’s say you are a facility owner who has invested both time and money in developing a coach on your team. Since then, you’ve developed a stronger value system and more purposeful mission within the business, and it has really helped you understand how to drive the business forward. However, it has also become more and more apparent that the coach you trained is somewhat troublesome, doesn’t fit with the rest of the team, and if you care to admit it, never really did. Was the original hire a mistake? Probably. But you did your best with the information you had at the time.

There’s still an opportunity to move forward in a way that is meaningful for everyone. This may well mean getting rid of the coach – but contrary to how it might feel, this can be a positive for him or her, too. That coach is never going to be fulfilled in a team or business where he or she is not aligned with the core values that everyone else has bought into and is upholding.

There is danger in protecting what we have, instead of making way for what we want.

This principle doesn’t just apply to the coaches who run the business. The ability to admit our mistakes and take action on them, no matter how deep we are down that rabbit hole, creates sustainability for fitness business owners, the business itself, and coaches who work there.

Confident, successful coaches and business owners are the first to admit that they were wrong about something they previously believed.

Unconfident coaches and business owners create infrastructure to protect what they have.

When someone challenges the beliefs of these coaches. they’ll use phrases like:

In my plight to be a better human, coach, business, owners, and educator, I’m challenging myself to start a blog series about things that I used to believe as a coach, but now know to be wrong.

The first of this series is coming next week. In the meantime, if you want to be challenged as a coach, from your core coaching beliefs right down to the definition of coaching itself, well, that’s what we do at Strength Education. We will even challenge the way you think.

If this sounds like something you want to get your teeth into, click the button below and let’s start a conversation about your coaching.